free usps priority on orders over $100 (domestic USA only) 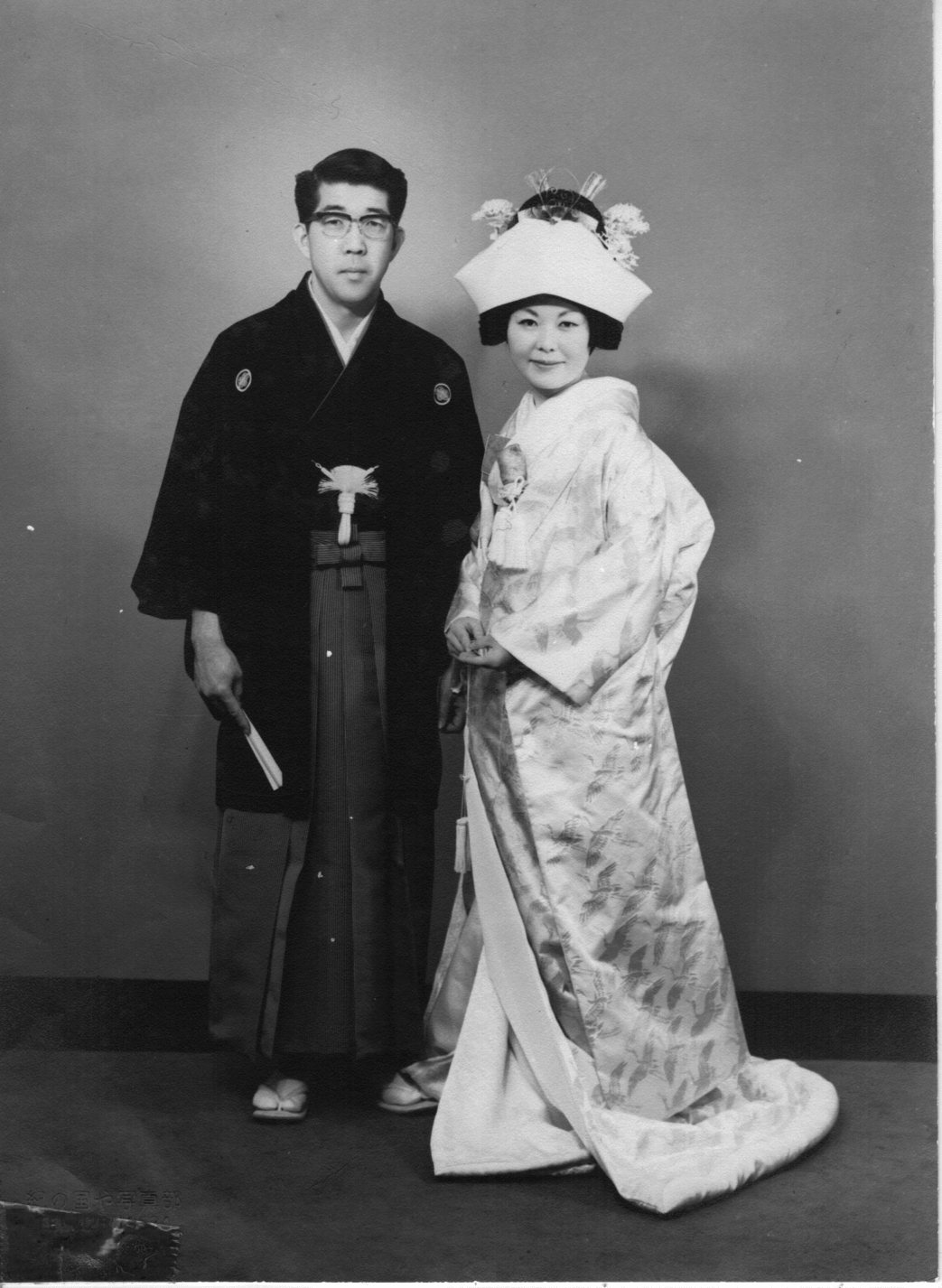 When my parents got married in 1967, my dad was just starting his first new business venture, so my parents' wedding bands were simple 14KG bands because my mom insisted that she'd rather my dad save his money to invest in the company than to buy her a fancy ring ("You can . They had the same plain wedding bands for decades, but sometime in the 2000s(?), my dad tripped, and he badly sprained his ring finger, with the band still on it. It swelled up so much and so fast, that he went to the ER because it was getting worse every minute, and he couldn't take the ring off, which was then cutting off the circulation in his finger, making everything, worse.

The hospital told him that they could not (or would not? I can't remember that detail at this point) cut the ring off his finger, but told him that that is what he needed to do, first and foremost. So my dad went home, and being the resourceful "I have a lot of power tools in my garage" guy, decided that he could maneuver a tiny electric saw under his swollen finger and cut it off himself.

I DON'T KNOW WHAT HE WAS THINKING, AND FOR ANYONE READING THIS, DO NOT ATTEMPT THAT ON YOUR OWN! EVER!

So many things could have gone wrong at this point, but the gods were in his favor that day, and he was able to use his electric saw with just one hand, to cut his wedding band off his other hand, without hurting himself in the process. Thank goodness, he is right-handed.

In any case, his finger healed, but his wedding band had an uneven cut from the electric blade, and after the ring sat on his dresser for another decade, he had also gained some weight, making the ring too small to wear.

As many of you know, I don't do jewelry repairs unless it's one of my own designs, and I also don't usually work with gold, but I made an exception for my dad when he told me that he'd like to be able to wear his original wedding band again. 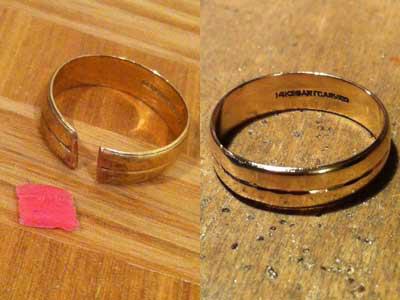 For reasons unknown, this is the only photo I have of my dad's ring repair. If you look on the left side of the photo, you'll see what looks like a pink square. It's actually pink wax. I accounted for metal shrinkage, and I handmade an "extension" of the band, an exact replica of the band (plain band with a very minimalist "diamond cut" groove that went around the center of the band. I then cast that piece in 14KYG, and soldered it seamlessly into the old band, sanded, and finished it back into a high gloss. You can't tell in this grainy photo, but even in person, you really couldn't tell that there was a "fake piece" that was made separately, and then soldered into place.

Where did I learn to do this? When I was in high school, I took silversmithing for 2 semesters, and I fell in love with it! I was in that sweltering jewelry lab by myself for hours. For my final piece, I made this cast sterling silver bracelet that my instructor told me "couldn't be done," but I was determined! I created it entirely in wax, flat, and then when I was done hand-building the scalloped design by using layers upon layers of melted wax, deposited from the tip of a dental tool over a flame (this took me several months), my instructor, Mr. Jenkins, taught me how to bend it into this cuff shape by warming it up in a cup of warm water, and then delicately bending the wax into this shape, little by little. It was so thin and brittle, that this part caused me major anxiety, but I got it done! (Again, more reasons why Mr. Jenkins originally told me that my design was a bad idea and I probably wouldn't be able to see it through to the end). 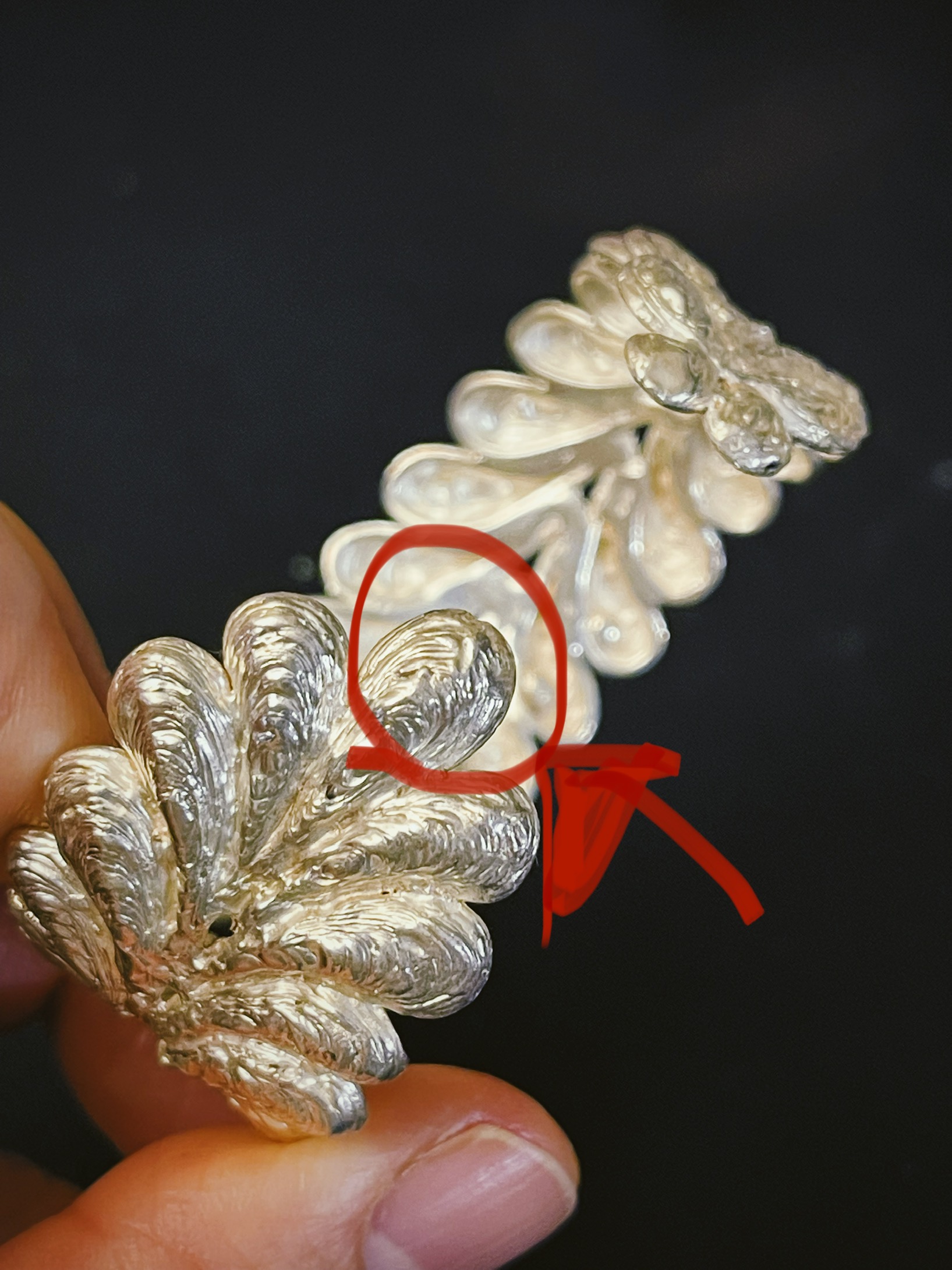 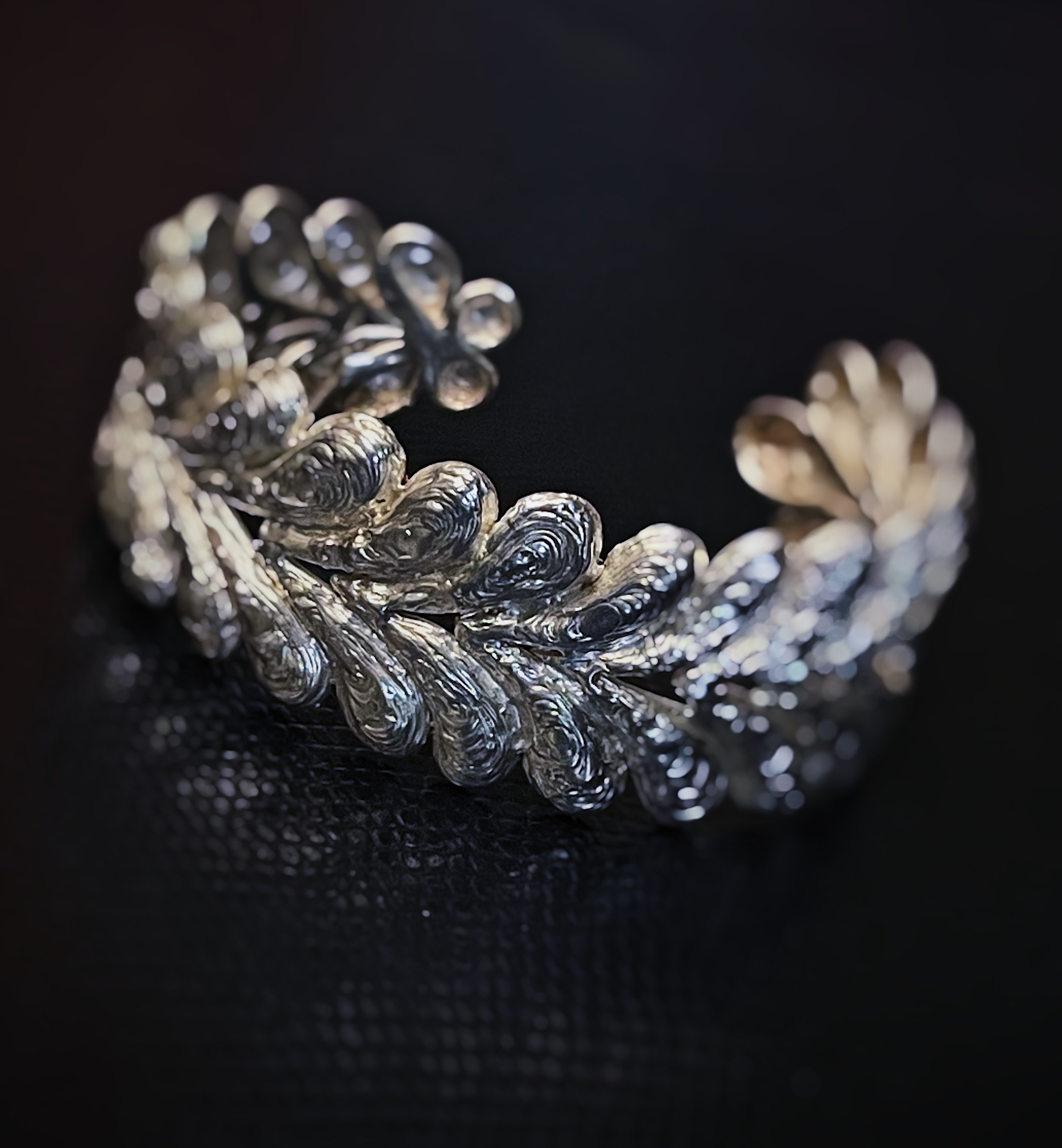 For the jewelry casting classes at Punahou, not only did we learn to do wax work, but we also made our own plaster molds so that we could cast it into precious metals ourselves. It was a two-person job to handle the old-school, manual, centrifugal casting machine. One person puts their plaster mold in place on this spinning contraption, winds it up many times, and holds on to it, while someone else gets a huge torch and melts the metal in the center. Once the metal melts to a liquid form, the "winder" lets go, and the unwinding manual machine starts to spin really, really fast, sending hot, molten metal from the center, toward the outside of the casting machine and straight into your mold.

Back to my point: so when I cast this bracelet, because parts of the wax were so brittle and thin, the very end piece didn't come out--the metal couldn't flow all the way to the very edge. It missing gap was so obvious, that I couldn't really "hide" it or sand it down (it was missing in the shape of a V, so the bracelet end looked like a forked snake's tongue), so Mr. Jenkins told me to account for some shrinkage, but to make a "fake piece" to fit exactly into that missing V spot. Once I made the wax and cast that missing piece in sterling, I soldered it into place, and I might add, for my extra effort on the piece "that couldn't be done," I ended up with an A+! I still love this piece + wear it often. I originally gave it to my mom for her birthday, but years later, she gave it back to me and told me that I should keep it and wear it myself because it was the first piece of jewelry that I ever cast.

I can tell that there's a "fake piece" there, but in the same way as my dad's ring, I don't think anyone else would notice, unless I pointed it out. In fact, for me, it's kind of cool knowing that I have the patience to do this kind of work--to be able to fix things that have significant sentimental value to someone, knowing that it actually takes more skill + patience to fix it than to make something similar from scratch. Handcrafted jewelry is an organic, sometimes imperfect process, and when an issue comes up, it is up to the designer to come up with creative solutions, and that's what I like about it. It makes a piece unique + adds character! It really IS special, and totally unlike any other. Furthermore, both silver and gold are softer metals, which means that when a piece is worn daily for decades--because it is loved--it will eventually "look" very loved, too, with imperfections + battle scars that will accumulate as it accompanies you on your adventures. And that is exciting: it is a sign of a life well spent.