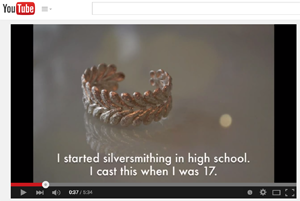 Click here for the "About JanetJewelry" Video!
See how I started:  a video montage that I made in iMovie, showcasing my first silversmithing pieces in high school to glimpses of my commissioned work for celebrities! 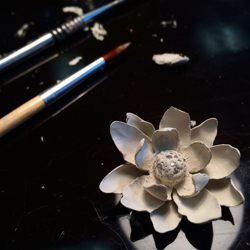 Janet Sterling Silver Design began in Janet's living room in 1997, and has since grown into a full online boutique, with clients all over the USA, Canada, Japan, and Europe, and in 2002, a retail boutique in the fashionable Chelsea District of New York City.  After the birth of her 2 amazing kids (2006 and 2010), she closed the retail shop in order to spend more time with her children, and has since focused once again on working solely through her online store, this time, at a home studio. 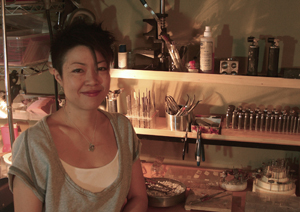 Janet Akie Masamitsu was born in Japan and raised in Honolulu, Hawaii, where she began taking silversmithing classes at Punahou School. She received her BA from Santa Clara University, with a major in History, a minor in Art History, and a European Studies Emphasis. Jewelry making took a backseat while she pursued a teaching career, but after receiving her MA in Gender Politics from New York University, she realized that she spent all her spare time making jewelry, and decided to turn her hobby into her dream vocation.

Janet programs her own website, and maintains her own FB, Instagram, Twitter, and Pinterest pages.  During Covid social isolation time, she has been learning how to make short form videos.  So many things to do, so little time!

Janet resides in downtown New York City with her husband, 2 fantastic kids, and a rescue mutt named Drax.  She designs, produces, and makes all the jewelry in her NYC home studio. She is passionate about Gender Politics and issues surrounding gender equality/inequity, and is on the Board of Directors of Womankind, a non-profit organization that helps survivors of gender-based violence.
×